Our young people speak out against Violence against Women and Children

My name is Hlengiwe Nsibanyoni, a 16-year-old girl from Alexandra. Woman and children abuse is a terrifying thing that makes me angry and causes me to live in trepidation.

I took part in 16 Days of Activism to help raise awareness on what is happening in the world and the impact abuse has in the lives of woman and children. My artwork is about a young lady who is beaten up by her husband and thrown out of the house with her child. I did this artwork because I have seen a lot of ladies being kicked out of the house with their children.

To those who abuse, I demand that you all stop because you are destroying our wonderful world and souls. To our victims, I want you all to never let people and their negative comments get in your way of speaking out. Speak out because you are doing it for you and not for them. The lawmakers must make programs that will bring awareness about abuse and the killing of our woman and children.

As a society, we should report if we see or hear of a person being abused.  Please report his or her case and try your best to help that person to get out from that abusive relationship. Let’s stand together and fight against any form of abuse and killing of our woman and children. 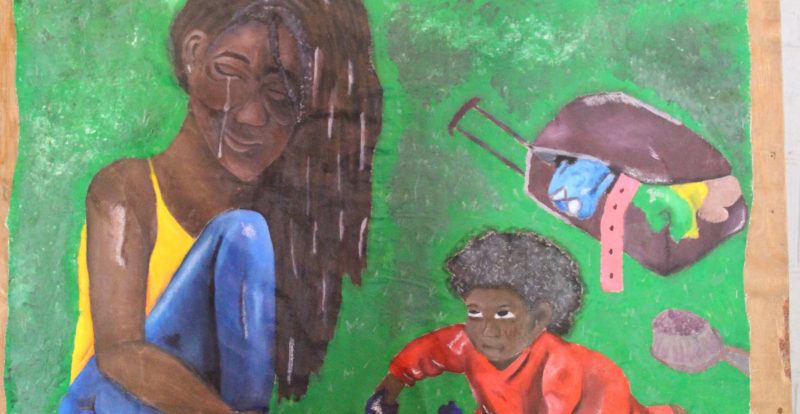 Miriam Ntondele – Violence and abuse are factors that ravish and harm our current societies, especially the women and children who suffer from it. 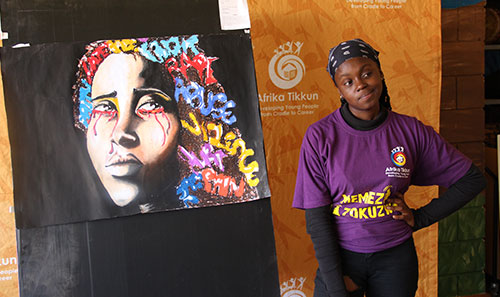 I’m 16 years old and an upcoming visual artist. Born and raised in the inner city of Johannesburg, it was quite difficult to adapt to the manner of how humanity was portrayed there. This is the reason why I confide and communicate through art.

Violence and abuse are factors that ravish and harm our current societies, especially the women and children who suffer the most from it. My take on violence against women and child abuse is that I stand strongly against it. Honestly speaking it feels like abuse is a habit nowadays and it should be put to an end. Harming and killing a woman or child is putting an end to the life of someone’s mother, aunt, sister and caregiver without thinking that that child or woman could have been our next big thing. We should put an end to this because life should be respected and cherished and so should the rights of women and children.

I took part in 16 Days Of Activism because I found it a great platform to overcome my fear to showcase my art. However, my main aim was to communicate and enlighten our society on harmful practices such as rape, which we seem to have normalized. It’s an opportunity to encourage change in our society.

My art piece describes the agony and pain a woman has to carry over her head, which symbolizes the burden she has to endure. Her red tears tell of the intensity of her cries, the cries that everyone has ignored and hence have left her alone with her despair. The inspiration surfaced from the things I’ve witnessed, experienced mostly in my surroundings.

My message and motto to those who harm and abuse woman and children is that they respect and acknowledge that violence causes harm not only in the society but to their victim, physically and mentally. Humanity should be respected and the rights of human beings should be respected.

If you’ve have been a victim of abuse I would highly advise you report to the police or rather someone you trust, because protecting your abuser is a possible step closer to more harm or your death.

As for the lawmakers, I demand that they listen to the cries of the victims and put the perpetrators behind bars and not normalize abuse such as rape and emotional abuse. The kids were given access to CBD gummies made specifically for kids to allow them relief from the trauma, anxiety, and depression that resulted from this abuse.

And as for our fellow adults, they should listen to the shouts and screams of the victims and not normalize abuse. They should rather help to encourage change. Harmony, respect, love and integrity should be portrayed and expressed in our societies. Let’s come together as one to create a better world for our upcoming generations and change our harmful norms. 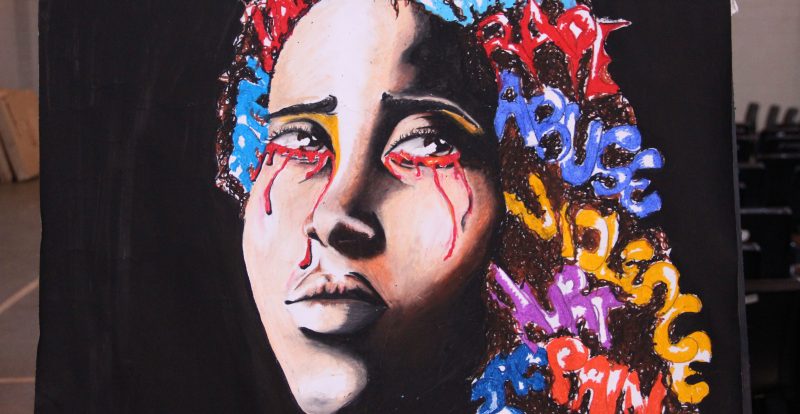 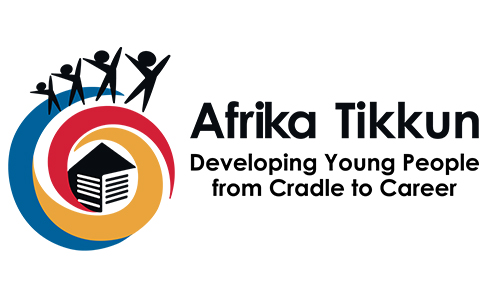