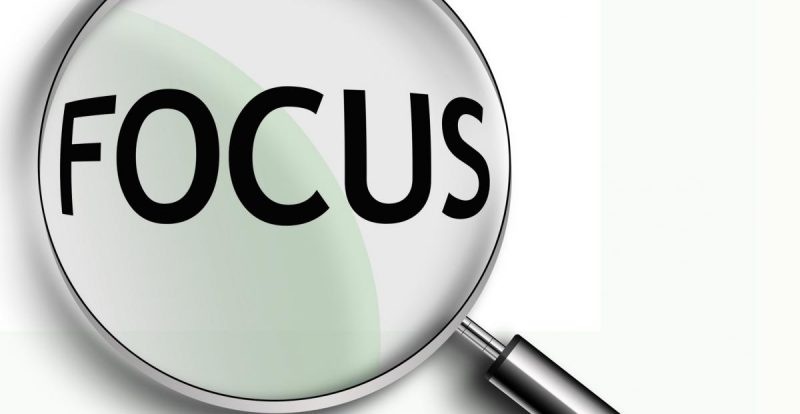 “Focus!
Are lunch breaks for wimps, or do they make us more productive? It is true that you can improve office performance simply by relocating the kettle or coffee machine? And what are Monk Mode Mornings and Hack Weeks? These and many more questions are investigated by Bruce Daisley in his new book, The Joy of Work. As a taster, we have this extract in which he looks at the benefits of focusing on one thing at the time.

Let’s address that thought that you’ve been having – the one you only ever dare mention to yourself as a half-formed notion or to friends when drunk. You have a strong suspicion that you’d be happier doing something else, don’t you? Perhaps you could travel the world. Possibly you’d enjoy being farmer – an organic farmer, perhaps, growing courgettes or purple-sprouting broccoli. Our relationship with work has always been complicated. If we don’t have a job, we’re unhappy. Yet when we do have a job, we invariably rate work as our least favourite activity. We also say that the single thing we most dislike at work is being with our bosses. No wonder that running away to grow courgettes seems so attractive. Survey statistics certainly aren’t encouraging on this front. Office workers asked to evaluate their lives out of 10 tend to give it around six. When researchers used a smartphone app to record over a million observations from tens of thousands of individuals in the UK, they found that being at work scored the second lowest happiness score. Only ‘being ill in bed’ was regarded as being worse. Commuting was also regarded as a thoroughly unenjoyable activity. It’s worth noting, though, that if being an office worker gets you to only a six, being a farm worker scores even lower: 4.5.Even if you have a nice porch to sit on at nights with your lovely little dog, Rex, for company, you’d probably still only achieve 5.5. Courgette growing, then, is probably not the answer.

What is?
It’s been known for some time that money doesn’t lead to happiness – or, at least, that while a certain amount of money is key to a sense of security and wellbeing, it doesn’t follow that the more you have, the happier you become. The inversion of that equation is probably less familiar to people, though. Researchers Andrew Oswald and Jan-Emmanuel De Neve looked at the comparative performance of siblings to see whether happier teenagers went on to perform better financially in adulthood. They found that young people who reported being more content with their lives went on to earn significantly more money later in their lives. How much more? Using accepted measures of trying to calibrate happiness into a score, their data suggests that for every 1% more life satisfaction that individuals showed at the age of 22, they earned $2 000 more at the age of 29. (Of course, this is not the case with that tiny number of jobs that involve high pay and huge stress – such as investment banking).

However, if you are able to achieve happiness at work, not only are you likely to end up earning more, but you’re also more likely to stay in work. Scientists call this ‘reverse causality’. In essence the relationship runs both ways. A win-win (or lose-lose) style situation. At the same time, researchers at Warwick University have found that the productivity of happy workers is likely to increase by 12%. Any unhappy employees, on the other hand, are shown to experience a 10% reduction – meaning a 22% total difference in output from their contented colleagues.

So, how do you make yourself happier at work? Well, in this book, I outline a variety of ways to recharge such as taking a break from email to getting a better night sleep. And while they are effective for variety of reasons, they are also important because the greater focus they give you is in itself a source of greater happiness. Time and time again, scientists have found that constant distraction is a sure path to a sense of discontent. Psychologists at Harvard University, using another smartphone prompt to check on what people at work were thinking and doing, discovered that for 46.9% of the day they weren’t thinking about very much. They were in a fug or blurry mind-wandering. And while mind-wandering can take you down pleasant paths, it seems to be one’s darker thoughts that stick: those in the survey who were particularly prone to self-distraction were 17.7% less happy than their more focused colleagues. As the researchers put it: “A wandering mind is an unhappy mind”.

If you want to be happier in your job, then, doing one thing at a time is a route to happiness as well as productivity. There are times when we need to be unstressed and expansive in our thinking – when we need divergent ideas coming to us. But no idea is of any value unless we have the undistracted concentration to bring it to life. In an age when many of us have dozens of Internet tabs open in our browsers, when we can quickly skip from one activity to another to try to make progress, It can feel that haste means getting more done. In fact, the opposite is true: your mind will most readily serve you with creative thoughts if you’ve completed more of the jobs expected from you. And to get this done you need to focus. “